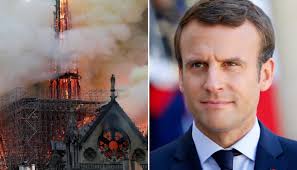 
“French president Emmanuel Macron invited the world to work together to rebuild the cathedral”.


“We will rebuild Notre Dame Cathedral even more beautifully. We can do it, and once again, we will mobilize (to do so).”


“Fundraising has already begun in the wake of the fire that engulfed Paris’s Notre Dame, as the French president Emmanuel Macron invited the world to work together to rebuild the cathedral.”

Brothers and sisters; this is too good to be true. Raise your hand if you watched my last PowerPoint Project.
https://www.youtube.com/watch?v=9SChzLuidzE

I had asked the Lord, ” Whatever happened to Emmanuel Macron’s Peace Plan? What the Holy Spirit led me still sends shivers down my neck. Check out the PP presentation.

So, I figured, well, let me ask him about Notre Dame. People… are you ready for this????

Where do I start? First of all, who will be the two busiest and most popular people in the world in the now and near future. Let me give you two words.

Catholic Cathedral. and France. ( I know, that’s three) Yep. THE POPE and who else? EMMANUEL MACRON. We’ll come back to another word later. “REBUILD”

It was the fires that burned in Paris as seen in the previous Power Point presentation that put Macron on the back burner for a few months. Look what happened. It is another well timed fire that will pole vault our boy Macron back into World Leadership. This fire brilliantly unites all of France behind their leader and gives him a World Platform along with his buddy the Pope to HEAL and UNIFY. The whole world has already expressed their solidarity to rebuild. MACRON AND THE POPE WILL UNIFY AND PEACEFULLY REBUILD.

BTW, does that word, “Rebuild” remind you of anything? Who is rebuilding the Notre Dame Catholic Worship House. Well, it’s Emmanuel Macron and the Pope. Who will rebuild the Jewish temple? Well, it will be the AntiChrist and the False Prophet. What a coincidence?

OH, and BTW, The European Parliament Elections will be held in the end of May. Macron badly needs some good press. He may have just gotten it…