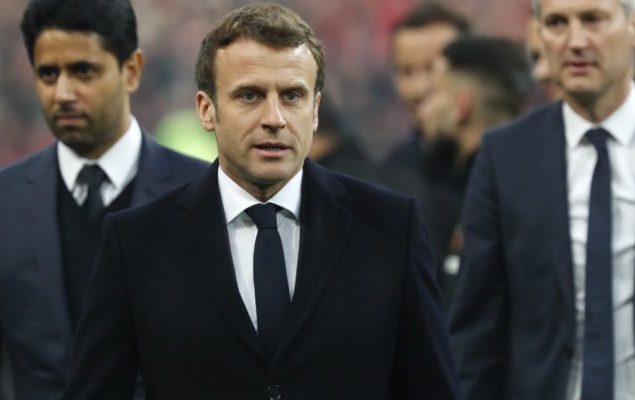 Look who is speaking for all of Europe…

Iran announced on Wednesday it will keep excess uranium despite warning from France that any pullout from nuclear deal could lead to the reimposing of international sanctions.

Iran’s president said Wednesday that it will begin keeping its excess uranium and heavy water from its nuclear program, setting a 60-day deadline for new terms to its nuclear deal with world powers before it will resume higher uranium enrichment.

This despite France’s warning on Tuesday that even a partial pullout could lead to the reimposing of international sanctions, Reuters reports.

A senior French official told Reuters on Tuesday, “We do not want Tehran to announce tomorrow actions that would violate the nuclear agreement, because in this case we Europeans would be obliged to reimpose sanctions as per the terms of the agreement.”

“We sent messages to Tehran to say that we were determined to implement the agreement, that we really wanted them to stay in this agreement even though we took into account the complexity of the situation and passed on the same messages to our American allies,” the source said.

Hassan Rouhani’s address to the nation came on the anniversary of President Donald Trump’s decision to withdraw America from the atomic accord. Rouhani said Iran wanted to negotiate new terms with remaining partners in the deal, but acknowledged that the situation was dire.

The 2015 deal saw sanctions on Iran lifted in exchange for limits on its nuclear program. After the U.S. withdrew from the accord it restored crippling sanctions on Iran, exacerbating a severe economic crisis.

Iran sent letters Wednesday on its decision to the leaders of Britain, China, the European Union, France and Germany. All were signatories to the nuclear deal and continue to support it. A letter was also to go to Russia.

There was no immediate response from the U.S. However, the White House said Sunday it would dispatch an aircraft carrier and a bomber wing to the Persian Gulf over what it described as a new threat from Iran.

The U.S. last week ended deals allowing Iran to exchange its enriched uranium for unrefined yellowcake uranium with Russia, as well as it being able to sell its heavy water to Oman. The U.S. also has ended waivers for nations buying Iranian crude oil, a key source of revenue for Iran’s government.

Currently, the accord limits Iran to enriching uranium to 3.67 percent, which can fuel a commercial nuclear power plant. Weapons-grade uranium needs to be enriched to around 90 percent. However, once a country enriches uranium to around 20 percent, scientists say the time needed to reach 90 percent is halved. Iran has previously enriched to 20 percent.

Rouhani said the decision was a meant to resuscitate the agreement. “This surgery is to save the (deal), not destroy it,” he said.

“If the five countries join negotiations and help Iran to reach its benefits in the field of oil and banking, Iran will return to its commitments according to the nuclear deal,” Rouhani said.

Europe has made efforts to salvage the agreement with the European Union creating a trade mechanism to bypass U.S. sanctions, despite the Trump administration warning it not to do so.