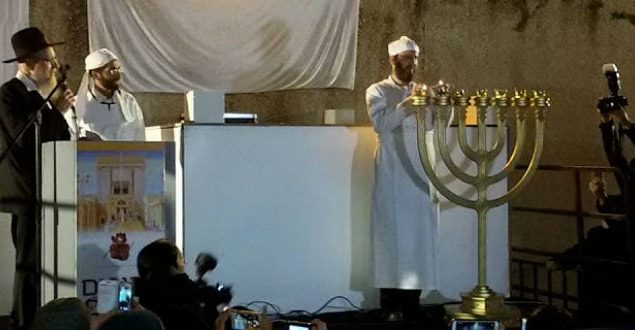 “Establishing a court system is the third Noahide law that was explicitly described in Genesis,” Rabbi Weiss explained to Breaking Israel News.

And Hashem said, “Let us make man in our image, after our likeness. They shall rule the fish of the sea, the birds of the sky, the cattle, the whole earth, and all the creeping things that creep on earth.” Genesis 1:26

This imperative and the framework for justice is described in Deuteronomy.

You shall appoint magistrates and officials for your tribes, in all the settlements that Hashem your God is giving you, and they shall govern the people with due justice.You shall not judge unfairly: you shall show no partiality; you shall not take bribes, for bribes blind the eyes of the discerning and upset the plea of the just.Justice, justice shall you pursue, that you may thrive and occupy the land that Hashem your God is giving you. Deuteronomy 16:18-20

Notice the scripture reference that the Sanhedrin in quoting... (my comment)

Say to it: Thus said Hashem: I am going to deal with you, Mount Seir: I will stretch out My hand against you and make you an utter waste. Ezekiel 35:3 (The Israel Bible™)

I’m really starting to get excited about my comments about THE NEXT UNIFIED GOVERNMENT IN ISRAEL WILL BE THE SANHEDRIN!

If you take into consideration what the bible says about the results of the Isaiah 17 and Ezek. 38 war, and the comments by the Rabbi’s in my last few post, it’s not difficult to imagine exactly what will happen by the Sanhedrin. As I said, the things that I have heard from the Lord in the Last 40 years have never been wrong.

ONE THING IS FOR SURE. ISRAEL IS NOT GOING TO ALLOW IRAN TO GO MUCH FURTHER WITH THEIR NUCLEAR AMBITIONS. THEY MUST BE STOPPED AND SOON.

And another interesting note, and I mentioned this before… If anyone in Israel is keeping score, apparently the Sanhedrin is ACTIVELY and PUBLICLY fighting a concerned war against the enemies mentioned in Ezekiel.
WHAT WILL HAPPEN AFTER THOSE EXACT COUNTRIES ARE DECIMATED?

Will the people of Israel remember that it was the Sanhedrin that spoke out against their enemies? Will they insist on being ruled by the Sanhedrin? I think it’s a good bet. And you know what? My money is on the Sanhedrin.