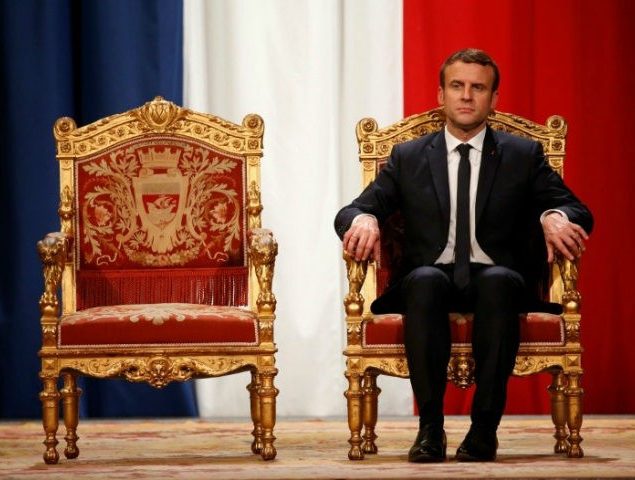 Could this be one of the most important pictures for the 21st Century?

I think it might be. So, let me offer my reasoning and see if you either agree or disagree. ok?

This may be a lengthy article so please bear with me.

First of all, my perceived declaration of my thoughts. What we are seeing here are the two thrones or the two legs of Nebuchadnezzar’s dream image.

We know from Scripture that there will be TWO LEADERS during the 7 year tribulation period. One will be Emmanuel Macron and the other will be the Pope. One is secular and the other is religious. And they don’t mix. I suppose the Roman Catholic Church was the last to try this with their Popes who were also the civil rulers.

Scripture tells us that:

Daniel 2:41-43 …’And whereas thou sawest the feet and toes, part of potters’ clay, and part of iron, the kingdom shall be divided; but there shall be in it of the strength of the iron, forasmuch as thou sawest the iron mixed with miry clay. And as the toes of the feet were part of iron, and part of clay, so the kingdom shall be partly strong, and partly broken?. And whereas thou sawest iron mixed with miry clay, they shall mingle themselves with the seed of men: but they shall not cleave one to another, even as iron is not mixed with clay.’

But, if I am correct, we will see a ROMAN POPE sharing power with a Revived ROMAN EMPEROR named Emmanuel Macron. a RELIGIOUS LEADER sharing power with a CIVIL LEADER. Part Iron… Part Clay, with the Civil leader eventually over-powering the religious leg. We see this in scripture when the Anti Christ declares himself to be GOD! There will be no need at that time for another religious head of state. The antichrist fully possessed by the Devil Himself will be able to handle both jobs.

Now, if you will allow me, I would like to tie in an old but very relevant study I did about the Two Witnesses.
At that time, some of the reasoning behind my 8 point study had to do with some MISSING ELEMENTS. Things that were not there. Sometimes they are as important as the elements that are clearly seen.

I believe because of this misunderstanding of scripture there is no or very little chatter about his identity. I too had to ask the Lord why He told me that Emmanuel Macron is the AC. I like everyone else assumed that we can’t know now but will be revealed after the rapture. As I said, I would like to bring in one of my points that were mentioned in the study about the two witnesses. It has to do with Heb. 9:27 “Appointed Unto Men Once to Die”

Please if you will read point one. I can copy and paste it here, but I decided not to.. So here is the link. thank you for taking the time to look at it.

I have heard many many Preachers dismiss this verse and give their particular weak reasoning on why this is not a doctrinal statement. I hope, after reading and digesting what was written here, that you will see that it is definitely a doctrinal statement and to dismiss God’s Word as irrelevant because it makes no sense to us is folly.

My understanding of the word “revealed” as to when the AC will be made know is also misunderstood and makes my certainty of Emmanuel Macron’s now identity as he, is best understood by this explanation. The statement that is on the cover page of this website.

“The identity of the AntiChrist will be made known and manifested to the WORLD after the Rapture. There is no reason why we can’t know now.”

If you understand this statement and understand that the WORLD will know who he is after he signs the 7 year peace treaty with Israel. To be manifest.. to be made known, but to whom? Scripture doesn’t say that His KIDS cannot know… I know.

One more point in reference to Macron. And I mentioned this on my last post. IF MACRON IS NOT THE ANTICHRIST THAN WHY IS HE SITTING ON A THRONE NEXT TO AN EMPTY THRONE? (BTW, I emailed the writer of the article that contains this picture to see if she can add any background info to this setting.) One friend of mine thinks that he is at a news conference and is waiting to speak. Anyway…

Now, let’s talk about the missing person for the second throne in the picture. I am going to attempt to show you why that person is OBVIOUSLY not sitting there at this time. But first, once again, indulge me please and read point 8. The Transfiguration

Did you read it? Good.. Now, as I said, if the raiment of both one dead Prophet and one still living Prophet were mentioned and written about, I believe that that would have been too much information and solved the somewhat mystery of the id of the two witnesses. ( you’ll need to think about it to see what I mean.) Therefore the Lord did not include those relevant facts. He wanted to leave it as a somewhat mystery so that we can obviously study the scriptures ourselves. He does that very often as you know..

Now, look at this picture…

I believe that this is 100% accurate depiction of what will soon take place. THE TWO LEGS OF IRON, BOTH ROMAN WHO WILL SOON CHOOSE THE TEN TOES.

It’s just a little too early for the reality of this scene to take place.

The two legs of Iron (Roman), morphing into the 10 toes. But, soon after that the STRONG will subdue to weak. The AnitChrist Macron will declare himself god and completely dilute the clay.

There is certainly enough room here for disagreements. But, this is my offering.

3 comments on “The image for the 21st Century!”