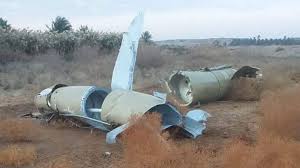 You know, I wonder… If any Americans were killed by this attack, I think the wheels would have been set in motion for what we are all waiting for.

But, I think it’s a little too early for God. So, I’m thinking that He intervened and what happened is what happened. No casualties.

Three hours later, Iran launched more than 15 ballistic missiles at two Iraqi bases, including Al Ain Assad itself, which houses about 1,000 American troops. The attacks ended without casualties, while military officials considered the response options in the event of casualties, which could have led to widespread conflict.