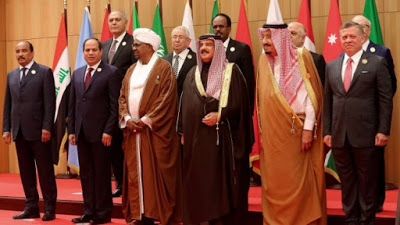 4 They have said, Come, and let us cut them off from being a nation; that the name of Israel may be no more in remembrance.

5 For they have consulted together with one consent: they are confederate against thee:

6 The tabernacles of Edom, and the Ishmaelites; of Moab, and the Hagarenes;

7 Gebal, and Ammon, and Amalek; the Philistines with the inhabitants of Tyre;

8 Assur also is joined with them: they have holpen the children of Lot. Selah.

The extraordinary meeting — scheduled for Thursday at the request of the Palestinian Authority — will bring together Arab foreign ministers via video conference, rather than a face-to-face meeting, due to the global coronavirus pandemic.

The Arab League’s deputy secretary Hossam Zaki said the ministers will “discuss in their virtual meeting providing political, legal and financial support to the Palestinian leadership to confront the Israeli plans”.

It comes after Israeli Prime Minister Binyamin Netanyahu and his political rival Benny Gantz signed a deal for a unity government that could accelerate the premier’s plans to apply Israeli sovereignty parts of Judea and Samaria this summer.