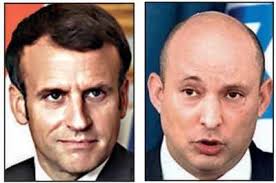 A few days ago I posted a piece saying that the perfect scene would be for a meeting with Israeli Pres. Bennett and Macron and Putin.

Well, we are not there yet but we are headed there.

Israeli PM meets Putin in Moscow, then speaks with Zelenskiy by phone.

French President Emmanuel Macron had spoken to Bennett before he flew to Moscow to brief him on his own conversations with Putin, the Elysée Palace said.

Uhm. THERE ARE MEGA IMPLICATIONS TO THIS SCENARIO.

Thanks to Ray for the headsup.

Oh And BTW, Sorry to say this but, the United States must decrease and decrease very soon. It sure looks like the bible will be correct again for the 100%th time and the EU under Macron will take over the World as the leader. It is not going to be NATO that fixes anything. And if it will be the EU then the US and NATO must decrease. And quickly.

And perhaps our Boy Macron will have something to say about this, this week.

“Oren noted that while Putin rebuffed heavyweight diplomatic outreaches before the invasion, “Russia is in a different position today and Putin may be looking for a way out of his predicament. Naftali Bennet just may supply the ladder.”

GOD DID NOT ALLOW RUSSIA TO HAVE IT’S WAY. IT NEEDS TO GO GOD’S WAY!

IMHO, this meeting with Putin and Bennett and maybe Macron is HUGE!

It proves all of the Ezek. 38 TV prophets wrong. Russia will not attack Israel before Psalm 83. Putin and Israel are somewhat of friends. IMO, according to Ezek. 38 Russia doesn’t even want to attack Israel.

They will be a GUARD for Iran and Turkey. Not one of the attackers. But, then Putin will think an evil thought and then decide to attack Israel.

For OIL? No, not in my opinion. FOR GOLD!.For Israel’s GOLD.   Read about the Copper Scroll. That is why Israel will reluctantly agree to join the attack against Israel. And that MUST happen after the soon Psalm 83 war.
GOD IS PULLING THE STRINGS.  IMO, that is why that 40 mile caravan of Russian infantry is stalled.