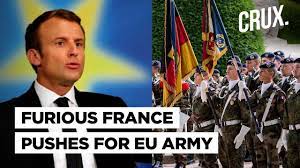 The result at the time was a rupture between Trump and Macron, followed by the French leader’s rapprochement with then-German Chancellor Angela Merkel. Still, Macron’s idea went no further. Until now.

To cope with all of this, Europe now intends to act, in unison and with determination, to build a powerful military-industrial structure that can spring into action whenever and wherever the collective or even individual interests may be threatened.